The European Parliament has published the provisional results of the EU elections held across the European Union Member states from 23 – 26 May 2019: 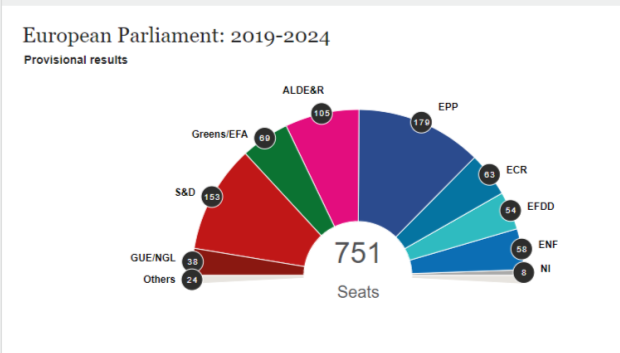 With the turnout at historic highs, approximately 51% of the registered EU citizens voted, making European democracy the single winner of this election. The above composition of the European Parliament is based on provisional or final national results in all Member States, based on the structure of the outgoing Parliament. Since 2009, according to Parliament’s rules of procedure, a parliamentary political group consists of at least 25 Members elected in at least seven Member States.

On basis of the above arithmetic, the political division of the European Parliament is as follows:

• Others – Newly elected Members not allied to any of the political groups set up in the outgoing Parliament: 24 (3.20%)

The EU Parliament in 2014 informally introduced the Spitzenkandidat system, a lead candidate for the EU Commission presidency, allowing the largest parliamentary group to nominate the Commission President. Considering that the two largest groups no longer benefit from clear majority in the new Parliament, and with the opposition to the Spitzenkandidat process from French President Macron, it remains to be seen how will the process evolve politically and what type of coalitions could be formed.

According to the Treaties, Member states formally nominate EU Commission presidency candidate, but in doing so, they must take account of the European election results. The European Parliament approves the Commission President with an absolute majority (half of the MEPs plus one).

In 2016, Poland introduced a retailer tax imposing 0.8% revenue taxation on retailers with monthly sales from PLN 17 million to 170 million, and 1.4% for shops with sales above PLN 170 million. The European Commission launched a State aid procedure against Poland as the Commission understood that the retailer tax construction favoured smaller shops, which could be seen as State aid. The Thursday ruling of the EU Court means that Poland will be able to resume collection of the suspended tax on the retail sector. However, Poland’s Finance Ministry said on Thursday that the suspension on the tax will remain in place until the end of 2019 as the decision will likely be under appeal.

The OECD has published the submissions received in response to the public consultation on the draft report on tax morale.

The consultation was launched following a Public Consultation Document being published which updates previous OECD research on tax morale in individuals and, additionally, presents a new business section, using OECD tax certainty data to discuss business tax morale in developing countries. The forthcoming publication, entitled “What is driving tax morale? An empirical analysis on social preferences and attitudes towards taxation” is expected to be published later in 2019.

The comments submitted by CFE on behalf of the Global Tax Advisers Platform can be viewed on our website.

The Council will continue to regularly review and update the list in 2019, whilst it has requested a more stable process as from 2020 (two updates per year).

5. FTA Negotiation Between EFTA and MERCOSUR

On 6-10 May 2019 the European Free Trade Association (EFTA) and Mercosur States met in Buenos Aires, Argentina, for the 8th round of negotiation on a broad-based Free Trade Agreement (FTA).

The meeting covered: trade in goods; rules of origin; sanitary and phytosanitary measures; technical barriers to trade; trade remedies; trade in services; investment; intellectual property rights; government procurement; and legal and horizontal issues. Negotiations on some chapters of the free trade agreement have already been finalised.

The next round of negotiations will take place in Geneva, in the upcoming summer.

The Mauritius government on 04 May published a notice implementing new penalties for non-compliance with country-by-country reporting requirements set out in 2018 regulations.

Taxpayers may also be liable for a penalty of up to MUR 50,000 if they deliberately provide inaccurate information or discover the inaccuracy at a later time and fail to inform the director general of the Mauritius Revenue Authority.

The guidance stipulates that any transfer pricing adjustment on the transfer of a Peruvian entity’s shares involving a foreign related party would affect both the acquirer and issuer if there would be less Peruvian income tax or greater allowed deductions or costs applying Peruvian income tax laws.

The new SUNAT guidance aims to reduce the incidence of international double taxation.

The Uganda Revenue Authority (URA) recently announced the roll out of digital tax stamps. The first goods to be affected are cigarettes, where changes apply from May 2019 and alcoholic beverages, where they will apply from July 2019. Soft drinks such as water and soda will be included in August and September 2019.

Digital tax stamps are physical paper stamps which are applied to goods or their packaging, and contains security features and codes to prevent fraud: tamper-proof features. A product is affixed with a stamp that gives real time information to the Uganda Revenue Authority (URA), policy makers and consumers.

On 28 May, Albania signed the OECD Multilateral Convention to Implement Tax Treaty Related Measures to Prevent Base Erosion and Profit Shifting and became the 88th jurisdiction to join the BEPS MLI Convention. The BEPS convention aims to combat tax avoidance by multinational enterprises (MNEs) through prevention of Base Erosion and Profit Shifting (BEPS).

The BEPS multilateral instrument was negotiated within the framework of the OECD G20 BEPS project and enables countries and jurisdictions to swiftly modify their bilateral tax treaties to implement some of the measures agreed. The MLI entered into force on 1st July 2018.

The CFE Tax Advisers Europe Forum will take place on 6 June 2019 in Brussels, this year entitled “Creating Tax Certainty in an Uncertain World: Double Taxation, Tax Rulings & Dispute Resolution Processes”. There are limited places available, for the remaining interested attendees.  More details about the Forum programme and registration process can be found here.

An excellent line-up of speakers will discuss and analyse current means of avoiding tax disputes and examine the dispute resolution mechanisms. Tax certainty issues related to the State Aid challenges of tax rulings and advance pricing agreements (APAs) will also be discussed.

Interested attendees from the EU institutions, other public institutions, Member states’ representations to the European Union and journalists can attend free of charge. Please contact the CFE Brussels office for more details at info@taxadviserseurope.org.